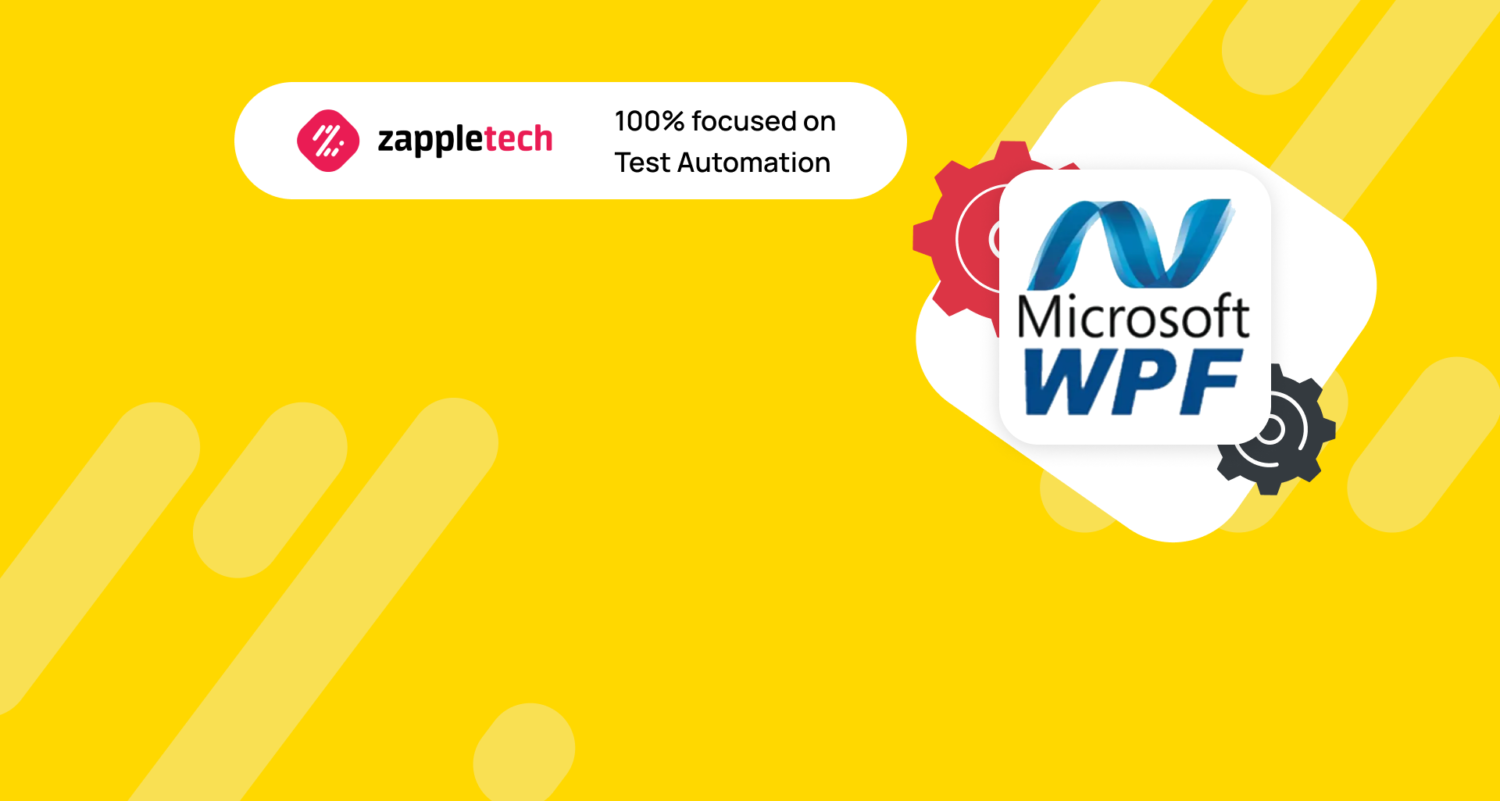 When we talk about developing and testing desktop solutions for Windows OS, we most often mean the classic approach to programming and subsequent verification of all software components. Now more and more apps are released based on cloud technologies and services, but it does not mean that desktop programs are losing their relevance. Instead, specialized products and simple utilities are in demand among consumers, which means that WPF and .NetCore-based developments remain in trend among professional developers. ZappleTech is engaged in QA as well, as we have gone through a challenging path of learning methods and tools that helped us establish our priorities. Our experts highlight the top 5 solutions for optimal performance that we want to share with you.

Unlike standard technologies, WPF cannot boast the same level of loyalty to specialists, especially to the QA and testing departments. This is due to programming logic and UI elements that work with dependencies and a “container” system. It means that several classes are collected into one block and reproduced when a certain condition is met, interacting with the code and visual components. This is what makes WPF automation testing difficult and reduces the efficiency of manual testing.

To launch a WPF app, the consumer OS must have .NetFramework libraries. And if earlier developers had to optimize their product for different versions of this framework (starting from version 3.0), now it is unnecessary.

Since 2016, Microsoft has been maintaining a new .NetCore platform, built on the Visual Studio libraries, which combines earlier versions of the framework. In 2020, the corporation released an update called .Net 5, which creates programs compatible with earlier versions.

A complex system of dependencies, linked libraries, and frameworks makes writing scripts for WPF automation testing more complicated. In addition to the above, here you have to take into account the visual elements. Moreover, you have to describe each one individually because of the variability of the possible results.

If in the early stages of programming it does not cause any problems, then in the later stages, it turns into torture for the QA team.

Let’s consider the main nuances of each testing type:

WPF automation testing tools: what is it, why, and how to use it?

Software testing tools can be either ready-made or self-written. From the latter, by the way, professional utilities of IT teams often grow, sold on the market like any other specialized software. Usually, unique tools are written for specific tasks, containing sets of functions for tests and particular conditions. But now the majority prefers to use advanced utilities that can cope with many urgent tasks, and now we will talk about such products. This review presents 5 tools used by WPF automation testing professionals like ZappleTech.

This tool does more than just test a scripted function. Its set of features includes a scheduler for creating a chain of tests, looping one element with different values, and scripting the necessary components with a list of attributes and containers with variables. The main purpose is to test user scripts in a limited environment. This takes the BDD (Behavior Driven Development) approach. Even simple apps such as a calculator require careful testing! SpecFlow checks all scenarios (even with a randomly generated value) and produces a relevant result (partially describes the problem in case of a bug). It is one of the top 5 utilities for WPF automation testing.

A free WPF automation testing tool. The primary task of the utility is to create scripts for test automation. With its help, user scripts can be programmed, and the relevance check is launched in both single and cyclical modes. The latter is needed to eliminate errors in the results, which are not considered or lost during manual processing. In addition to working with simple values ​​and arrays, it interacts with the user interface at a primitive level. However, AutoIt greatly transforms WPF automation testing. The tester receives a user-friendly utility with advanced control logic and a simple but functional GUI.

AutoIt is a flexible utility that emulates the workflow of the average PC user. It does the job effectively by displaying relevant results from each test cycle. Suitable for both classic tests and regression tests.

Any software consists of modules, both functional and visual. Manually checking each of them in various scenarios takes a lot of time, which is not always appropriate due to the deadlines. In such cases, NUnit, a unit testing framework, comes to the rescue. Initially, it was part of the Java library, but over time, it was rewritten for C# and integrated support for most of the languages ​​of the .NET family. Now it is actively used by developers and QA specialists as one of the most loyal and functional WPF automation testing tools.

A classic tool for testing and debugging software on Windows. It is one of the most popular and demanded frameworks in the WPF automation testing tools market. Works with both UWP and Win32 apps. Tests are written in all programming languages supported by Selenium and Appium. Additional libraries are connected both locally and from external sources using Visual Studio 2015+. The syntax and formulations are standard for Windows programs, which simplifies the testing process for experienced specialists.

Universal testing tool for WPF, web, and mobile apps. The functionality of the program has a low entry threshold, which allows it to be used equally effectively by both beginners and pros. Its main trump card is the simple building of custom scripts and automated tests. The intuitive interface and management logic optimize the time spent on writing scripts. In addition, for successful WPF automation testing, it is not even necessary to write code because the program can be controlled with ready-made blocks that define the test script. The attribute system can randomize the testing range of values ​​and limit them to the most popular ones. It also indicates the conditions for executing the script, its cyclicality, and the number of launches.

Like the rest of the utilities from the list, Ranorex has a log containing screenshots. The program also notifies about bugs and saves an automatic detailed report with links between elements and dependencies.

Windows Presentation Foundation is one of the most popular platforms for creating apps of various complexity and functionality. Its main advantage is the visual style of the final products and the progressive possibilities for creating custom GUIs. The main drawback is problematic manual testing and a complex system for running full-fledged WPF automation testing tools. So, WPF automation testing becomes simple and fun. Just study the utility you like or order a testing service from ZappleTech, whose specialists have released more than a dozen successful products on the market. We can advise you on your issues or conduct complex testing. To do this, contact our managers, and we will provide you with qualified assistance.